When I received a runner up reward from Creative Quarterly for their issue 27 competition, I had mixed feelings- happy that my art had been acknowledged but disappointed that it was a runner up. You see, the runner up awards aren't published in their magazine. The only place to view these pieces is on their website (www.cqjournal.com). I truly appreciated receiving the award and felt quite honored actually, but I also wanted to see my artwork in their magazine. Feeling determined, I decided to enter their competition for issue 28.

I thought of all the illustrations I had completed over the last few months and decided to enter something quite different from my previous entry. This entry wouldn't be narrative (tells a story). It would be conceptual (based on an idea, thought or word)- a form of illustration which seems to be acknowledged in competitions more so than the narrative. Well, I guess I was wiser with my decision this time around because I actually received another award, and this time it wasn't a runner up! Yippee and Wahoo!!!

The Creative Quarterly Issue 28 will hit the stands in November and I will be in it!!! If you live near a Barnes and Noble, go pick one up or order one online!

Here's my winning piece. The title is "HOT": 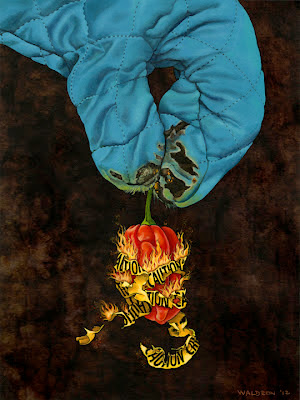